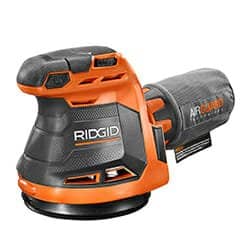 This Ridgid Cordless Orbital Sander contains a ball-bearing mechanism that allows the pad to randomly rotate in orbits, hence the name random orbital sander. This random orbital sander technology in Ridgid R8606B helps us to avoid any huge scratches on the surface that we are sanding. As a result, we get a uniform and even surface.

Ridgid R8606B has a lot of features. Some are helpful, while others are unnecessary. The following is a list of the best features that Ridgid 18V Sander offers –

Bulky and Heavy: Good or Bad?

If you have been using small, compact, and handy sanders for a long time, then the bulkiness of the Ridgid 18V sander will surely disappoint you. According to Amazon, the weight of this item is about 3.45 pounds. However, the weight is not much of a big problem as some people liked the sander being heavy because it helps them to keep the sander on surfaces without putting a lot of force and pressure by themselves. The main issue here is the bulky design of Ridgid R8606B which makes it uncomfortable and awkward to hold compared to other sanders in the market that are much smaller and easy to hold. But then again, it is cordless as well compared to other sanders in the market that are not.

The purchase of Ridgid cordless sander does not include the battery and the charger, as you have to buy them separately. However, you can use your old 18V Ridgid batteries, but keep in mind that the Gen X5 batteries will last longer than others. The battery backup is not that good as many people complain about the battery draining too fast. Some people found the solution to this problem by using two 4 amp hours battery alternatively. The weak battery backup of the Ridgid 18V sander is definitely a huge downside, but it is still a great affordable tool if you can find a way to work around it.

No LSA or Warranty?

A lot of customers have complained that Ridgid does not honor their Lifetime Service Agreement(LSA). These claims may not be 100% true, but it certainly displays a bad image of the company to their potential customers. The Ridgid R8606B does not provide any warranty as well, for which a lot of customers have shown their disappointment as well. However, some have also claimed that it lasts long enough considering the price.

Considering the price range which is around $60 at Amazon, Ridgid R8606B is a great tool with amazing helpful features. The sander being cordless and its speed variable dial are its greatest strengths. The battery backup is surely not all that impressive but as I said, you can still find a way to work around it.