The Hook and Loop attachment system is very popular in orbital sanders – in fact, every single orbit sander that made it onto our best orbital sander list uses some variation of the hook and loop system. But where did it originate from and why is it so popular for use in orbital sanders (As well as other power tools)?

A short history of hook and loop

The original inventor of the hook and loop system was a man named George de Mestral. He found his inspiration in the form of a common garden plant – Burdock.  George observed the fact that this plant would cling on to clothing, among other things, and was very difficult to pry free. He thought this would be very useful as a non-permanent fastener and that is how his idea for Velcro began. 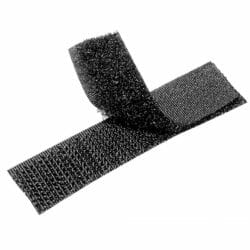 Even though George was certain he had invented a revolutionary product it was only the beginning of his battle – the real problem came when he started working on mechanizing the process – in other words trying to figure out how to mass-produce the product reliably.

First of all George looked at cotton as the main product to make his hook and loop strips but he found that it was an inferior material for the job, mainly due to the fact that it would quickly wear out when the material was attached and de-attached.

After some trial and error, George settled on nylon – relatively new material at the time. But even after finding this very suitable material, there was still a lot of work to be done. The problem was that in order to make the material effective in sticking the hooks and loops had to fit perfectly with each other, otherwise there would not be enough grip and the two would not form a tight enough bond.

Eventually, George came up with the perfect process for making the Velcro out of nylon and in bulk – to put it simply he would weave the loops from nylon, heat treat them to make them resilient, and then trimming half of the loops with a loom, creating a batch material that could act as the hook component and that would be a perfect match to its looped counterpart.

All in all the refining of Georges’s invention and the battle to make it easy to mass-produce took 10 years, but it would be worth the weight.

Whilst the idea wasn’t recognized for its genus straight away, it did slowly begin to pick up traction – in 1958 it got a mention from Sylvia Porter in her column Your Money’s worth and was dubbed a zipperless zipper. In 1959 it was used in the aerospace industry to help astronauts maneuver in and out of bulky spacesuits.

It was then used by several other industries including skiers, marine.

It eventually received further traction when well-known fashion designers such as Pierre Cardin and Paco Rabanne started to feature the product in their catwalk designs.

There were various changes in the design of velcro as time went on, including the reduction in the size of the hooks and loops as well as the indeterminate matching of hooks to loops allowing for a much stronger bond regardless of the size of the material.

Today the hook and loop system is used in all different applications and it also comes in varying strengths. Some fasteners are so strong that just a 2 inch square of the material, when connected together, can support an 80 KG load.

what is hook and loop sandpaper?

Why Hook and Loop is suited to Orbital Sanders

The hook and loop system works very well with certain power tools, especially random orbital sanders because of the nature of these tools and the way in which the sanding pad moves around. 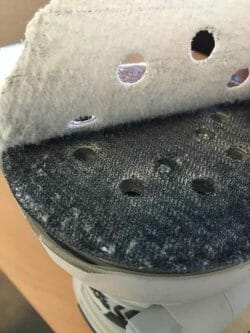 Because there is always a downward force on the sanding pad (As it is making contact with the area being sanded) as well as a random sideways motion – as the sanding pad spins on the surface being sanded – hook and loop sandpaper works perfectly because the hooks and loops are continuously pushed among each-other keeping a tight and secure bond.

It is only when removing the pad that the operator tears the sanding disc away from the tool’s surface and in doing so breaks apart the hooks from the loops – this sideways force is something that never occurs during the sanding process.

The result is that when sanding is in progress the pad stays very firmly secured to the orbital sander and when the pad needs to be removed it can be done so with very little effort.

Although not all orbital sanders use hook-and-loop sandpaper, for the very few that don’t use this system there are converter disks available in order to make them compatible with hook and loop pads. This means that hook and loop sandpaper is the most common type of attachment system used with orbital sanders and allows the user to find the best deal when it comes to sanding disks because they are often interchangeable between different brands of an orbital sander.